How to Prevent Ice Dams on Your Home

If you’re fortunate enough to live in the Sunbelt or some other balmy region, chances are you’ve never heard of—or at least experienced—ice dams.

But if you live in New England, every winter ice dams are as common—and as welcoming—as frostbite and sub-zero temperatures. That’s because ice dams can be destructive, and virtually impossible to remove once fully formed.

Ironically, ice dams are often responsible for one of the most beautiful and iconoclastic of all winter images: glistening, crystal-clear icicles hanging from gutters and eaves.

Here’s a brief explanation of how ice dams typically form: It all starts with a roof blanketed in snow. The snow layer that is sitting directly on the roof begins to melt, and water runs down the roof underneath the snow. When the water hits the overhanging eave of the house, it begins to freeze. Some water often drains into the gutter, where it freezes as well. 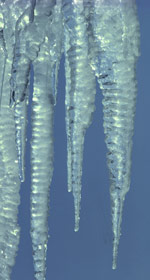 As the snow continues to melt and water freezes at the eave, ice eventually builds up along the roof, forming a thick ridge or dam. Then, as water runs down the roof, it’s blocked by the ice dam, and forced up under the shingles. I know this seems to defy all laws of physics (and common sense), but water will actually flow up the roof, working its way under the shingles. And that’s where the trouble really begins, since roofs are designed to shed water running down the shingles, not up.

Over time, the water will work its way beneath the shingles and the underlayment, and into the seams between the plywood roof sheathing. From there, water drips directly into the attic, where it soaks through the insulation and ceiling, before dripping into the room below. If not detected immediately, the damage can be very difficult and expensive to repair, especially if it ends up ruining the floor, walls or furnishings.

Now, the above explanation is a rather simplified version of how ice dams form, the science behind this phenomenon is much more complicated, but if you go back to the very beginning, you’ll find a clue to solving this problem.

The entire process starts when snow sitting on the roof begins to melt. That’s key because, ideally, you want the interior attic temperature to be as close as possible to the outside air temperature. That’s why there’s only insulation on the attic floor, not between the roof rafters.

However, if the attic floor isn’t properly insulated or if heated air is leaking through the ceiling, via cracks, crevices, ductwork and light fixtures, then the attic will become warm. And it doesn’t take very much heat to raise the attic temperature enough to melt the snow on the roof. Since the overhanging eave extends past the house, it remains cold, which is why the water freezes when it hits the eave.

So, what can you do to prevent ice dams on your home? Try these ideas: 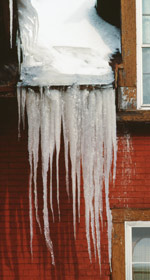 If your home already has ice dams, there’s not too much you can do about them. Avoid installing electric cables or any other device to melt the ice, as they won’t solve the problem.

You can try using a snow rake to remove as much snow as possible from the roof. That’ll at least remove the source of water.

Just be sure to work safely from the ground, since it’s never a good idea to climb onto a snow-covered roof.

Composite Roof Shingles: What You Should Know

We Back Our Warranty

Because our word is important to us.

We offer industry-leading warranties and stand by them 100%. We also use materials from companies who back their products.

Most of our basic repairs come with a 90-day warranty. For all other repairs, our guarantee starts at 1 year, and in some cases goes up to 5 years.

Manufacturers’ warranties range from 1 year to 30 years, and some will even come with a lifetime guarantee. And we will always spell out how long we will guarantee our labor in our estimate.

In the unfortunate event that something does go wrong, we make it easy to schedule an assessment of the work and to quickly arrange for any defects to be corrected.

If you are looking to file a new warranty claim, simply email admin@chapmanneil.com with your name, the job address, and the issue you’re having, and someone will follow up with you shortly.