Kicking Off Spring With the 4 Seasons of Home Ownership 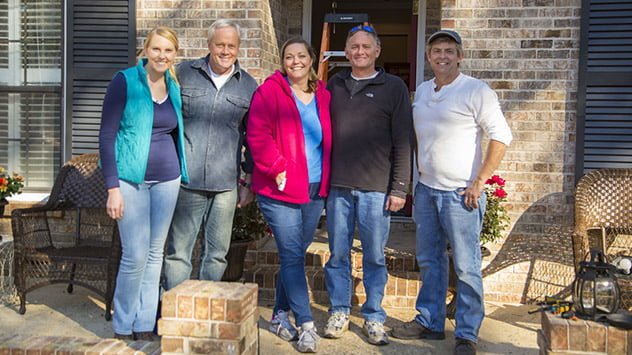 Homeowners Sharla and Stuart Brink help us kick off the 4 Seasons of Home Ownership with the spring checklist.

Check out the 4 Seasons of Home Ownership for more info and visit the spring page to download the complete checklist and interactive infographic.

This week on Today’s Homeowner we take on the Four Seasons of Homeownership with a fun family and some Springtime Chores!

After the break… A simple chore just got complicated…

There’s more Today’s Homeowner coming right up… but here’s a look at what’s happening next week… I’m tackling one of my own projects as we renovate a small living space…. in a beautiful place.

Maintenance is a fact of life for all homeowners. Regardless of how “New” or “Low Maintenance” your house may be, there are some things that simply MUST be done to take care of your biggest investment and the place you call home!

The list for each season includes those 10 “must do” items as well as some additional projects to tackle as time and budget allow or you want to take on something extra. For the Spring List, our guinea pig homeowners are Stuart and Sharla Brink. This is the home they share with their daughters, Lundy and May.

These folks Get It! So when Allen, Chelsea and I show up with our Maintenance Checklists they’re ready to go to work. Number one on the Must Do list is having the Air Conditioning and Heating System serviced by a pro. Right now Sharla and I are tackling number two… Cleaning debris away from the AC Condenser unit.

Cleaning the leaves from the gutters takes a little more time and effort and while they’re doing it they find another area for concern.

In addition to extending the downspouts, they also need to be flushed out. But one of them is still clogged….

We’re working our way through our 4 Seasons of Home Ownership list with our friends Stuart and Sharla. Allen and I have already covered items 1 through 4 and now Chelsea is helping Sharla take care of number 5….. Cleaning and Repairing Window Screens.

Regardless of how the hardware store got into that duct… we’re removing it… and the lint! When it goes back together I use foil tape to secure the connector to the outside vent. Apparently all this clean-up has inspired Sharla.

Next on the list is Lubricating all the hinges, gates and locks around the house. While Chelsea and Sharla handle that …. Stuart and I checking off item number eight, Sharpening all of the garden tools. That sets you up for number nine which is Preparing your Flowerbeds for Spring Planting.

With the “Top Ten Must Dos” complete, we can move on to some of the “If Time and Budget Allow” projects- First up Pressure Washing!

This Generac One Wash Unit has an on-board tank so applying the cleaning solution is REALLY easy. After that it’s time to change tips for cleaning.

Stuart and Sharla have just completed the Top Ten Must Dos on our 4 Seasons of Home Ownership List. Now that the “Must Dos” are done… we’re taking on some repair and upgrade projects that we discovered while we were working through the Top Ten. First up, Fix that leaning fence….

While we’re waiting for the new posts, we replace the rotten boards on the section of fence next to the house. We’re using several weathered boards that we took from the back corner of the yard because installing the bright new boards will be less obvious back there than on the front of the house. When the new posts arrive we can begin removing the old ones by cutting the nails holding them in place ….. As we do I discover another problem with this fence.

Next we set and level the new posts in place of the old. We’re using Fast Setting Concrete from Quikrete here for two reasons; we can mix it right in the hole and because it sets in less than an hour we can begin re-attaching the rest of the fence almost immediately.

Obviously they don’t understand my role as motivational leader and crew chief. But despite the near mutiny, the dirt gets moved… and spread… and packed down. This slope will direct the flow of water away from the home’s foundation and when Stu and Sharla plant grass later this summer, their erosion problems should be over.

The most difficult thing about installing a diverter is prying up the shingle tabs so you can slip it underneath them. Then it’s simply a matter of tacking it down with a few nails and re-sealing the shingles on top of it with some roofing cement.

While I’m installing this fixture, Allen and Stuart begin putting in the other one. Then Chelsea and Sharla return with furniture and flowers to dress up the porch.

Sharla’s a graphic designer by trade and this where that really becomes evident….

As people ready their homes for Spring they often want to know how warm it needs to be to paint outside? The quick answer you often hear is 50 degrees. That’s true for the majority of latex paints, but that answer can be deceiving. What the thermometer says when you apply the paint matters, but what the temperature does over the next 24 to 48 hours is just as important. In the Spring and Fall, daytime and nighttime temperatures can vary widely so dew forms on the surface easily in the cool night air. Even though paint may dry to the touch in a few hours, it’s still curing for hours and hours. When this moisture gets into uncured paint film it causes some of the ingredients to come to the surface when the moisture evaporates. That can lead to surface staining and adhesion problems. Even if the paint looks fine, it’s life expectancy will likely be shortened. Check the paint label. If the forecast calls for temperature to drop below their minimum temperature with a day or so of painting…. wait! Or look for a paint that can applied at lower temperatures.

This week we’ve given Stuart and Sharla a crash course in basic home maintenance. Plus we fixed the failing fence we discovered along the way and corrected the erosion Allen found by extending some downspouts and moving some dirt. And, in the process we’ve also been able to make some improvements….

Obviously these guys have seen the benefit of our 4 Seasons checklist and I hope you have too. We covered all of the Top Ten Must Do items on Stuart and Sharla’s home… From simple maintenance on the heating cooling system to important but easy chores on roof. Cleaning Vents and repairing screens… Lubricating and sharpening… prepping for planting and keeping your cool as the weather warms up.

Composite Roof Shingles: What You Should Know

We Back Our Warranty

Because our word is important to us.

We offer industry-leading warranties and stand by them 100%. We also use materials from companies who back their products.

Most of our basic repairs come with a 90-day warranty. For all other repairs, our guarantee starts at 1 year, and in some cases goes up to 5 years.

Manufacturers’ warranties range from 1 year to 30 years, and some will even come with a lifetime guarantee. And we will always spell out how long we will guarantee our labor in our estimate.

In the unfortunate event that something does go wrong, we make it easy to schedule an assessment of the work and to quickly arrange for any defects to be corrected.

If you are looking to file a new warranty claim, simply email admin@chapmanneil.com with your name, the job address, and the issue you’re having, and someone will follow up with you shortly.